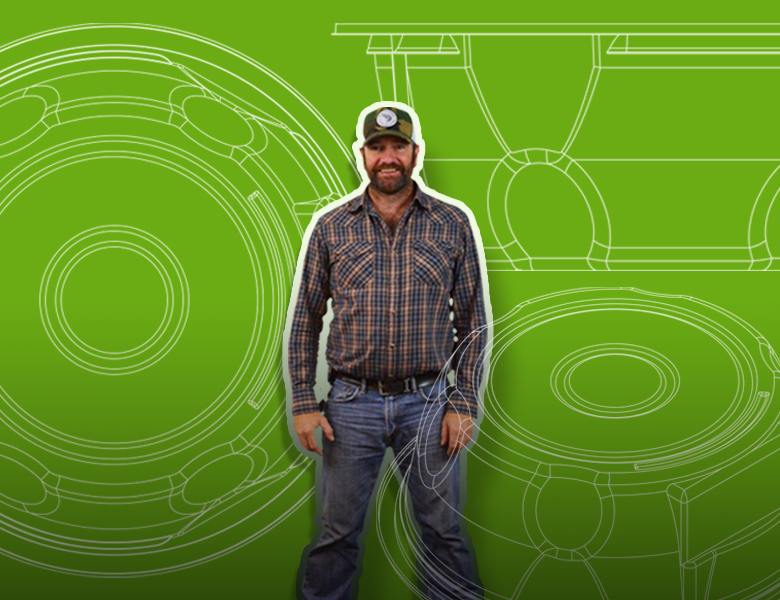 Believe it or not, the plastics recycling industry is fast-paced, always changing, and you really need to move quickly to keep up. One case in point: Ben McGregor, Director of Engineering at D6 Inc. rarely has time to slow down. So it was notable when recently McGregor sat for thirty minutes to talk about his role at D6 and share his thoughts on the engineering behind plastics recycling.

McGregor, who earned a degree in mechanical engineering at Montana State University, was installing fiber-optic lines in Bozeman when D6 founder Ed Dominion called and asked him to join the start up. It was 2014 and McGregor would become D6 employee number three.

“In the beginning, it was fast-paced, which seemed typical for a startup,” says McGregor. “I’d never been part of a startup, but we did everything: the designing, the selling, the forming, we did it all.”

That meant putting in long days, but it was fun. “There were not as many rules back then with just three people sitting in an office,” says McGregor. “But I’d never worked in plastics or recycling. I’d never learned so much in such a short time.”

What McGregor and the rest of the D6 team were attempting was to design, manufacture and sell food packaging products custom made from recycled materials. Breaking ground in an entirely new industry required lots of trial and error.

“We put in the time, and it was a numbers game,” says McGregor, speaking about all the work designing countless prototypes. “We were cranking out designs to see what would work, but It was a fun time.”

McGregor’s favorite thing about the early days was seeing the company’s progression and growth. “We went from hand-cutting prototypes to lasering,” he says. “Seeing our 3-D printer banks grow from two to ten, and bringing on new people, was really exciting.”

The fast pace, long hours in close quarters and constant experimentation fostered a sense of camaraderie. What McGregor didn’t realize in those early days was that he, Dominion and others were also creating a culture.

“It almost felt like family,” he says. “Being in a small office and figuring out how to create innovative designs was a lot of fun for those of us fortunate enough to be here.”

McGregor’s role in recent years has been leading the drive toward automation of some of D6’s production processes. That objective has taken a back seat since early in 2020, when the COVID-19 pandemic forced a change in priorities. The company quickly pivoted to producing protective face shields and masks—which were in such short supply just a year ago. It soon focused its culture of experimentation and innovation toward creating N95 respirator masks from recycled materials.

At the time, McGregor and others didn’t know how hard it would be to meet the rigorous certification guidelines required for N95 masks. “It’s been a roller coaster, and it’s really felt like the early days doing research day-in and day-out on materials, equipment and processes for making masks,” he says. “It was all-hands, but really fun to have everybody here involved and working on a common goal.”

D6 sought doctors and health care professionals to provide feedback. “You could feel their sense of urgency and that made it real for me.”

D6 doesn’t see demand for N95 masks ending anytime soon. McGregor points out the likelihood of other pandemics occurring in the future, and last year’s wildfires in Oregon. “People probably should have been wearing N95 masks when going outside during those fires,” he says. “Our intention is to create something that’s going to protect you when these things happen, and we’d like to see it become something that we offer on an ongoing basis.”

Once the certification work on N95 masks is complete, McGregor will get back to driving automation, and the pandemic presents new challenges even over that work. “We’re trying to pandemic-proof our products,” he says. “Part of that is producing and shipping them with as few people as possible touching them.”

Along with investments in robotics to aid production, McGregor is confident D6’s culture will play an important role in reaching its automation goals. “Around here you’re always given the opportunity to learn something new,” he says. “We’re a bunch of techy nerds who happen to have access to lots of 3-D printers. But we love tearing things apart and trying to understand how to make them better.”